RUTH SUNDERLAND: Working from home warriors must wise up

Diners looking to take advantage of the Government’s 50 per cent discount scheme from Monday can take a deeper gobble out of the cost, if they have an American Express credit card.

Its ‘Shop Small’ campaign has been running since late June and gives those who spend at least £10 in participating shops and restaurants £5 back on their card statement.

The cashback scheme, which only applies to physical purchases and can be used 10 times at different retailers, runs until 13 September, but it confirmed to This is Money that it is compatible with the ‘Eat Out to Help Out’ discount.

Quids in: Diners are looking at the prospect of healthy discounts from Monday

The Government scheme gives a 50 per cent discount up to a maximum of £10 per person on food and non-alcoholic drinks consumed in restaurants, cafés, bars, pubs and work and school canteens at participating businesses between Monday and Wednesday for the whole of August.

Around 53,000 businesses have signed up, according to the Treasury. You can type your postcode into this government website to find which restaurants are taking part.

However, with the two schemes compatible, the Amex £5 cashback being applied after a purchase and the discount scheme applying to the bill, it means those looking for somewhere to eat can potentially get a £20 meal for just £5, saving three quarters off the bill.

This is because the Government will pay 50 per cent of the cost per person up to £10 each, so the total bill for a £20 meal would be £10. Paying by Amex would see it refund half the cost, for a total bill of £5.

Amex’s ninth extended version of its campaign comes as 39 per cent of people surveyed by Santander said they’d spent more with local small businesses during lockdown, and 23 per cent spent more online with local restaurants.

Three in five said they would continue to do so after the coronavirus pandemic, while American Express said the average adult would look to spend £31 on a restaurant meal after lockdown.

To earn the £5 back from American Express customers must spend the money on their credit card in-person, it does not apply to online purchases

How do the schemes work?

Has anyone not signed up?

While around 53,000 businesses have signed up to the Eat Out to Help Out scheme, that still leaves thousands which have not.

Around 130,000 would be eligible to offer the discount, according to HMRC.

While some may simply be leaving it until the day of the scheme to register, some businesses may simply choose not to do so.

Ashley Keen, general manager of a restaurant on the Isle of Wight, told This is Money: ‘We just don’t need to as we are full.

‘When we were talking about it from an admin perspective we were worried it would create more admin work in terms of claiming the money back and we believe we’d even have to change till systems to accommodate the scheme.’

It is only possible to get the maximum £15 benefit from combining the two schemes by dining out.

While the Amex scheme would apply to a takeaway if it was collected and paid for in-store, online purchases do not count, and the Government scheme only applies to food purchased to eat in a restaurant, café or pub.

The Amex ‘Shop Small’ offer must be downloaded to an American Express credit card online or in its app.

It runs for 12 weeks from 22 June and those who download the offer, which is free, have 10 uses of the £5 credit to use by September.

However, it can only be used once per shop, meaning to obtain the maximum benefits cardholders must find 10 separate places signed up to the scheme. It is valid on purchases of £10 or more.

Amex say £5 credits should appear within five days of purchase, but they may take up to 90 days from the end of the offer on 13 September.

Meanwhile the Government’s scheme is fairly straightforward. While it is often described as a voucher scheme, diners do not need to carry around physical or virtual vouchers, the Treasury simply reimburses businesses for the discount they have given you.

The discount is 50 per cent per person on a final bill, up to a maximum of £10 each.

American Express credit cards tend to come with high interest rates and annual fees, although its popular gold card is fee-free for the first 12 months.

Many do their usual spending on the card to collect points which can be converted into Avios, and other uses, before paying it off in full each month.

Customers must make sure they do this, as the card comes with a representative APR of 56.6 per cent and an interest rate on purchases of 22.2 per cent. 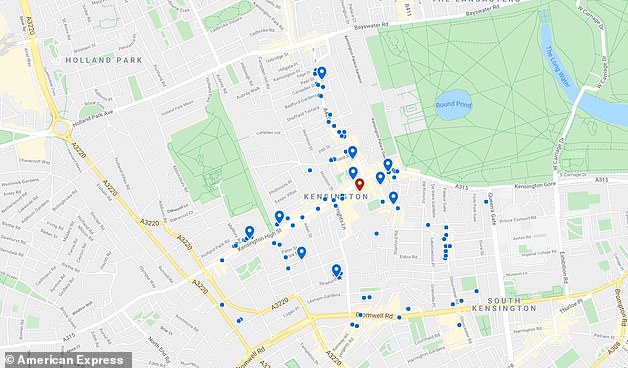 The locations close to This is Money’s offices in Kensington signed up to American Express’ £5 cashback offer. Some are also registered for the Government’s Eat Out to Help Out scheme

How much could you save and what is the best value?

Because the Government’s discount is applied to the bill, if two people have a meal worth £20 between Monday and Wednesday that doesn’t involve alcohol, it would be discounted to £10.

Then those who pay with an American Express credit card will get a further £5 off, taking the cost to just £5 – or 75 per cent.

Because the Amex discount is on purchases of £10 or more, those dining out at participating restaurants should be looking to get their food bill as close to £10 as possible using the Government discount, before the £5 Amex credit is applied.

The Government’s website states: ‘Where there is more than one diner on a single bill, the cap does not need to be calculated for each individual diner based on their specific orders.

‘Instead, the discount that is applied to the overall bill should be capped at the number of diners multiplied by £10.’

In cases where the discounted amount per head is below this £10 cap, the Government uses the 50 per cent off percentage calculation.

Interested diners can find out which businesses subscribed to both schemes on the Government website and on American Express’ ‘Shop Small’ map, and by putting in their postcode or where they want to eat.

From here, they can do some detective work and begin working out how much they can save over the next month.

Michelin starred restaurants signed up to Eat Out to Help Out

It is likely that some of these restaurants are also signed up to the Amex shop local offer.

THIS IS MONEY’S FIVE OF THE BEST CREDIT CARDS

INVESTMENT EXTRA: Put your trust in tech and back the American dream

There are just 87 days to go until the US election, and seldom have Americans …